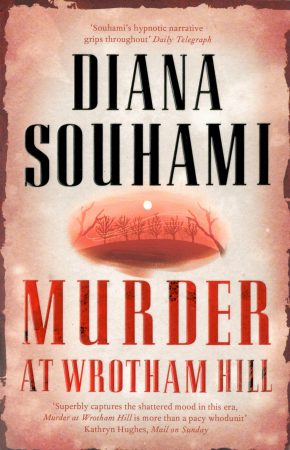 Before dawn on 31 October 1946, less than a year after the slaughter of World War Two, on a bleak roadside in Kent, a lone woman looks to hitch a lift to London. A lorry driver stops. The encounter ends in murder.

The victim, Dagmar Petrzywalski, is a gentle eccentric spinster. She had sought the peace of the countryside after her London home was bombed. She is the embodiment of Austerity Britain’s self-sacrifice and thrift. Her murderer, Harold Hagger is its opposite. His life is a litany of petty crimes, deceived wives, sloughed-off identities and army desertions. With their characters so indelibly marked the tragic outcome of their meeting seems determined by fate.

In Murder at Wrotham Hill Diana Souhami dwells on the significance of this crime, and shows that even after the killing of twenty million people in a global conflict, one death still has much to tell us. In doing so she paints a gripping portrait of post-war Britain that raises questions about murder, punishment and destiny.

Her characters include England’s first celebrity policeman, Fabian of the Yard; the celebrated forensic scientist, Keith Simpson; and history’s most famous and dedicated hangman, Albert Pierrepoint.

I wanted to write about the 1940s. I was born in the Crown and Anchor Edmonton at the beginning of the blitz on London. I have inchoate childhood memories of ration books, air raid sirens, gas masks, Spam, and ITMA on the Home Service. The postwar years held the promise of a good society: welfare for all, state education, the national health service. I took a true murder as the motor of my narrative.

A woman’s shoe flat and dark blue lay on the grass verge two feet from the kerb halfway up Wrotham Hill* in Kent. The hill was steep, the weather cold and showery. At noon on Thursday 31 October 1946 Jo Hammond a driver for the London Paper Mills on his way from Maidstone to Dartford taking six tons of baled paper from one mill to another saw the shoe. He double declutched his lorry into first gear. The shoe, like the corpse of a dog, suggested a casualty of traffic. Hammond stopped his lorry. He wondered if there were other signs of trouble. That apart the shoe looked new. If he found the other they might do for his wife Nada. She and Jo had married five years previously and now had two children, Julia four and Kenneth sixteen months.

The shoe was for the right foot, blue, flat, a mix of leather and suede, new, size 6, the maker’s name Oral embossed in gold italics inside with the style number: A12146. Oral was a good make. They had a large factory in Rushden in Northamptonshire, the country’s main shoe manufacturing town. There were over a hundred boot and shoe factories up there. Nada took a six. A pair of Oral shoes might cost £2.10 shillings and use up five clothing coupons. Rationing was tighter than ever since the war’s end. A lucky find was not to be passed by.

The grass looked trampled, the hedgerow disturbed. Hammond parted the brambles. He saw a woman’s legs. The toes of her right foot stuck out through a torn stocking, her left leg was bent, on its foot was theother shoe, her face was half covered by the top of her coat, her coat and dress rucked up, her right fist clenched. Damp leaves had fluttered down on her from autumn trees. The stillness of this crumpled discarded corpse riveted into his memory with other detail of the moment: the susurrous of tyres on the wet road, the smell of wet foliage, his own alarm and exhalation of breath. This was murder, that he knew.

He took his lorry up the hill to the nearby village of West Kingsdown to a phone box near the Portobello pub. He told the operator at the local exchange what he had seen. She put him through to the Maidstone police station. An officer asked him to spell his name, give the number of the phone, the location of the body. ‘Wait by the phone box’ was his instruction. ‘Someone will come.’ Hammond phoned his works’ manager and told him what had happened then sat on a bench by the kiosk holding the shoe.

No policeman came, the rain drizzled down, this was not how Jo Hammond had planned his day. He lived in Dartford and had hoped to be home early. Now he had a corpse in his head and explaining to do.

He was thirty seven, tallish, sturdy, broad- shouldered and with wavy brown hair. He was a Londoner, born and brought up in Stepney. His father had worked as a ships’ labourer at the Limehouse docks loading and unloading cargo. In his prime Jo played outside right for Queen’s Park Rangers and his picture was in the papers for the goals he scored: seven in twenty-one matches between 1933 and 1936. Now he was a family man with a living to earn and football was only a spectator sport.

He waited. He did not sit in his lorry in case the phone rang in the telephone kiosk. The war had been over eighteen months. King George had told them the years of darkness and danger were over and urged them to ‘make the world such a world as you desire for your children’. There was supposed to be an end to fear at the siren’s wail, the lust for killing.

Half an hour passed. Hammond again phoned the Maidstone police. He said he could not sit by the phone box all day in the cold and rain, he had a delivery to make, he needed to leave. He was given directions to the home of PC King the West Kingsdown policeman, instructed to go there, give him the shoe and make a written statement of what he had seen.

Mrs King told him her husband was out on his bicycle, somewhere in the village, she did not know where. She expected him back for his lunch. Jo Hammond drank her tea. Mrs King thought the dead woman might be local. Three months previously, five miles away in woodland near the village of Fawkham Green, a man walking his dog found the body of eleven-year-old Sheila Martin. She had been raped then strangled with her own hairband. Chief Inspector Fabian, of Scotland Yard, and Detective Superintendent Smeed of the Kent CID worked together on that case. They were unsuccessful. The Kingsdown villagers believed a local boy murdered the Martin girl. Several said they saw her at a motorcycle race at Brands Hatch with a boy in long grey flannel trousers and a tan jacket. But lots of the boys dressed like that. It was the fashion.

Fabian questioned all the boys, but if anyone had seen something suspicious or noticed unusual behaviour, he was keeping it to himself. The ‘golden hours’ when the crime was fresh passed. Fabian checked such evidence as there was – fingerprints, hair, semen – with the Criminal Record Office. Nothing came up. He was a thorough man, a true professional, a tactician and good on clues. But he needed interlocking bits of the jigsaw: a scarf with the maker’s label, a receipt, something to start piecing a picture, something to follow. The case eluded him. He had a profile but no evidence. The killer was a stranger, the motive sexual, the trail led nowhere. A murderer was out there somewhere and perhaps had struck again.

P.C. King came home for his lunch, took a statement from Jo Hammond and wrapped the shoe in cellophane. Serious crime was not his domain. Crime now peace had come to Kingsdown had shifted from infringement of blackout regulations and suspicion of draft dodging to cheating on the black market and selling potatoes at below the recommended price. There was the recent case when the car carrying the Maharajah of Jaipur to Leeds Castle crashed on the London Road by the Portobello Pub… But a body in the bushes at Wrotham Hill was for officers superior to him.

Praise for Murder at Wrotham Hill

Souhami’s dissection of the murder is completely engrossing in its insistence that fatality is about fallible human beings.

Souhami’s hypnotic narrative grips throughout. It is commonly held that murders tell us something about the societies in which they took place. But this post-war case does something else too. Both killer and victim stood at an angle to society, and the strangeness of their stories resonates deeply in another way, leading one to meditate on ideas of malevolent fate and evil.

Souhami persuades us that the death of one seemingly unimportant woman can be opened out into a profound scrutiny, not only of the past but of human conscience.

Souhami evokes these drab, joyless years with painful brilliance, so that one can almost feel the shabby poverty and smell the foggy, coal-dust-filled air. She plots the lives of the murderer and his victim with chilling precision.

Murder At Wrotham Hill is more than a pacy whodunit. It is a snapshot of a historical moment, a time when there was as much concern with moral debates as there was worrying about whether there was enough sugar to last the week.

It’s [a] willingness to open up the expected format that makes Murder at Wrotham Hill so compelling about its time and the attitudes of those living in it, rather than simply a voyeuristic account of a misfortune of bad timing that caused two miserable and pointless deaths.